Hollywood’s biggest night returns this Sunday after two years of pandemic-related disruption. But right now, you can get a close look at the costumes that have been featured in Oscar-nominated films at the “Art of Costume Design in Film” exhibit at the Fashion Institute of Design & Merchandising (FIDM) Museum. This is the 30th consecutive year that the exhibition has been in place.

Costumes from 22 Oscar-nominated films are on display, from Marvel’s “Shang-Chi and the Legend of the Ten Rings” to the San Fernando Valley coming-of-age play “Licorice Pizza.” Among them, the five Oscar nominees for Best Costume Design, including “Dune” and “Cruella,” might be the ones to watch.

Nick Verreos, FIDM President in Fashion Design, shares insight into the one-of-a-kind exhibition and the costumes that won it.

Costumes from more than 20 Oscar-nominated films are at the forefront of the FIDM exhibit. Photo by Alex J. Berlinger/ABImages.

What can we expect from the “Art of Costume Design in Film” exhibition?

Nick Verreos: As part of the exhibition that we have been organizing for 30 years, we also like to present the variety of genres of costume design. Not only will you still see vintage styles, but you’ll see sci-fi as well as contemporary.

We really want to educate the public that costume design isn’t always about what people design as Marie Antoinette’s costumes – although we have something similar with “Cyrano”, of course. It’s also about T-shirts, jeans and even little red shorts – like in the little red shorts from “King Richard”.

What are your personal favorites from this exhibition?

I must be the Switzerland of costume design. These are all my favorites, but I especially love Charles James’ red dress from “Cruella” and Lady Jessica’s dress from “Dune.” In fact, the costume designer said the Lady Jessica dress was probably the most expensive dress she had ever made. And when you watch it, it could be on the Oscars red carpet. 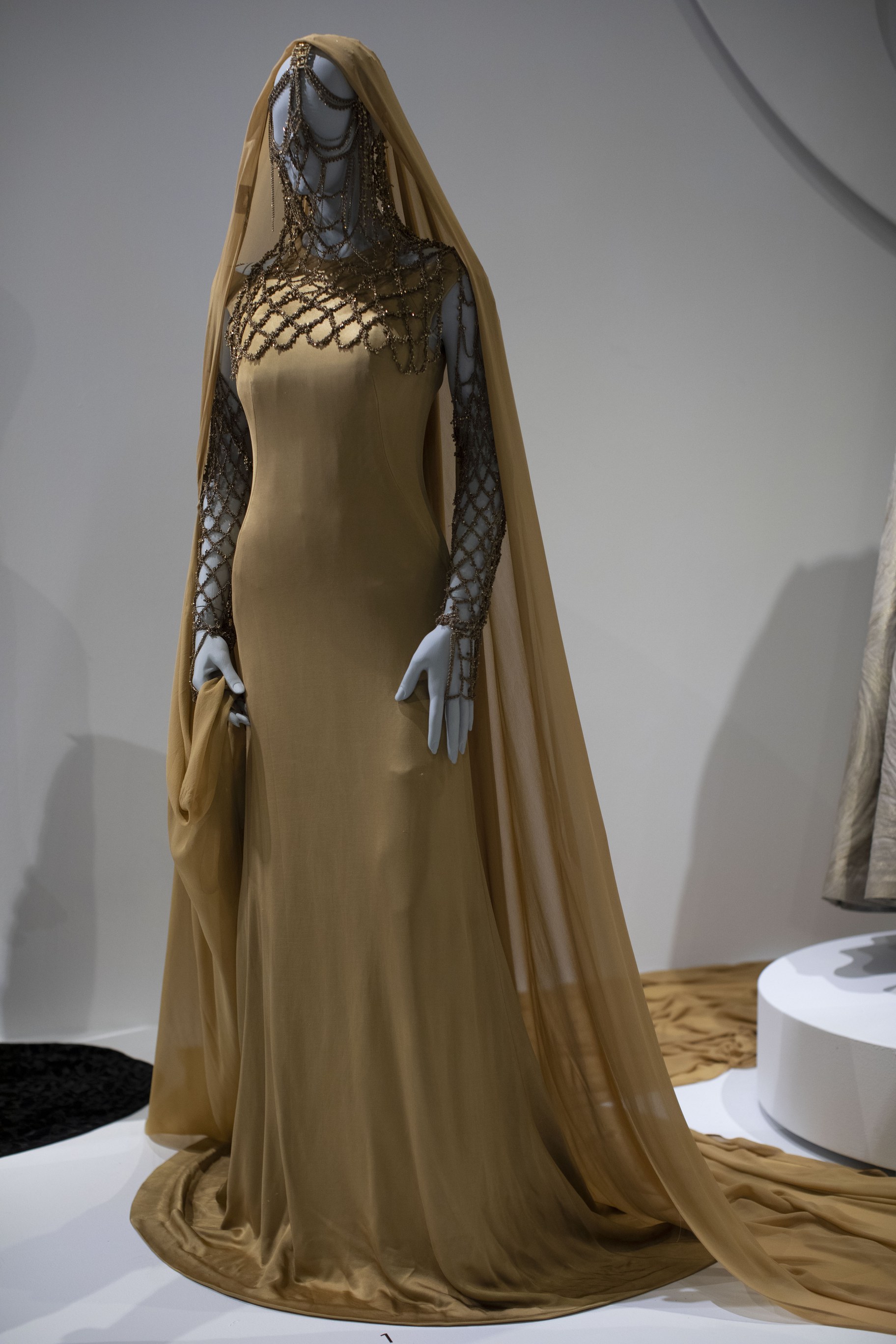 The dress worn by ‘Dune’ actress Rebecca Ferguson as Lady Jessica is said to be the most expensive dress costume designer Jacqueline West has made for a film. Photo by Alex J. Berlinger/ABImages.

What inspired the costumes for “Cruella” and which ones stood out to you?

“Cruella” is about Cruella before she became Cruella – when she was Estella. I think it put a lot of pressure on costume designer Jenny Beavan because it’s a movie mostly about a young aspiring fashion designer from the 1970s London punk scene. I think she really proved herself with this film.

Beavan says she thought of clothing stores from that period, such as Crocodile, Biba and Vivienne Westwood. She was also inspired by Nina Hagen, a German new wave punk singer.

I watched the movie on an airplane but noted every quarter inch of the clothing. For me it was perfection. I knew instantly that he would be nominated.

There is one particular red dress that we have on display – it’s a fire red dress. In the movie, she attends this party and the coat over the red dress turns into fire. This red dress was actually inspired by a 1955 Charles James dress called the “Tree” dress.

Jenny Beavan says one of her suits, which she has always used for several of her films, wanted to make this Charles James dress for a film and finally said, “Honey, you can do it for ‘Cruella’.”

What other films have influenced you with their costume design?

“Dune” was magnificent. Just talking about it gives me goosebumps. It was designed by Jacqueline West as well as Bob Morgan. Two thousand costumes were made for the film. [West] says that [number of costumes] is more than [the number] used for “Star Wars” as well as “Ben-Hur”. She said she watched different periods [for inspiration], and when you watch the movie, you see it. She actually said she had to go 1,000 years in the past to go 10,000 years in the future. 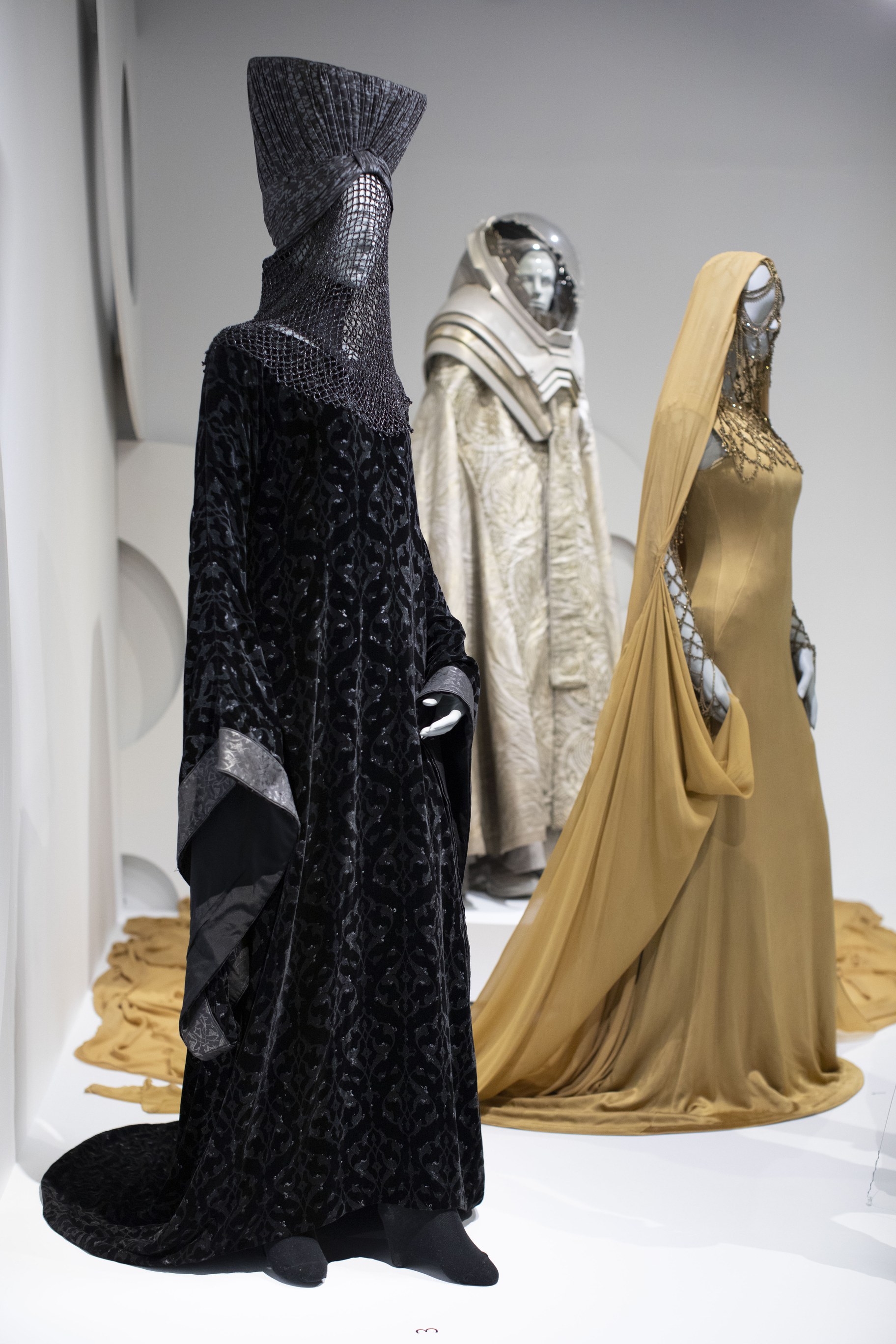 The three “Dune” costumes were among some 2,000 pieces made for the film, according to Nick Verreos, FIDM’s president of fashion design. Photo by Alex J. Berlinger/ABImages.

Even when you look at the Bene Gesserit, [West] said she was inspired by a modern version of the abaya or the habit of Catholic nuns. I think it’s fascinating to look back and then look forward when it comes to costumes.

Were there any movies with notable menswear?

[Menswear] is the peacock of fashion right now. I think it spilled over into the costumes. A good example of this is in “West Side Story”.

I love how Paul Tazewell, the movie’s costume designer, talked about how he separated the wardrobe, styles, costumes for the two different gangs, the Sharks and the Jets.

You have the ambitious Puerto Ricans (the Sharks), and they are more dressed up. They are dressed to aspire – more suits and more tailored ties because they want to do better for themselves and for their people.

While the white gang, they are dressed in work clothes, denim, almost like they gave up on fashion.

One of my favorites in the exhibit is from “The Tragedy of Macbeth” by costume designer Mary Zophres. Denzel Washington wears it. There’s this gorgeous cape coat that has little gold stars on it. This fabric actually comes from Valentino, so it’s a modern fabric for a period film. 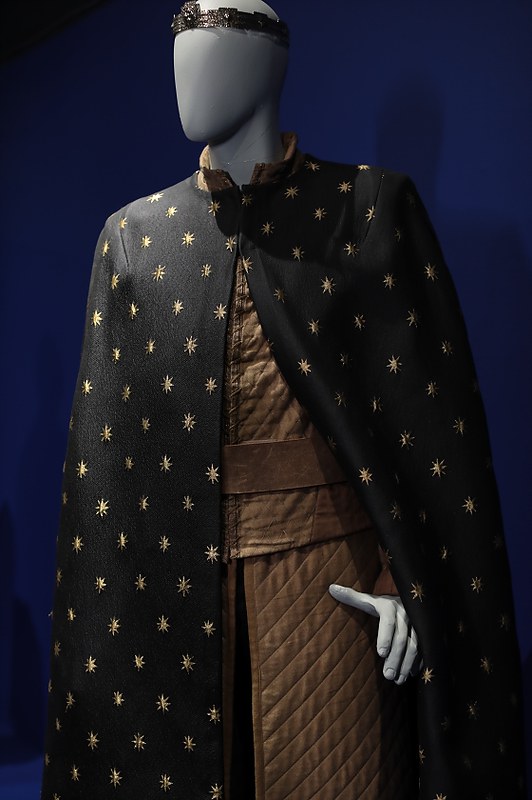 The cape designed by Mary Zophres and worn by actor Denzel Washington is on display at the FIDM exhibition. “This fabric actually comes from the house of Valentino, so it’s a modern fabric for a period film,” Verreos explains. Photo by Alex J. Berlinger/ABImages.

And of course, for all the Marvel fans, we have lots of Marvel costumes and lots of men’s uniforms.

Is the exhibition open to everyone?

Anyone can come in and experience the art of costume design. I think by charging a fee you could limit the number of people who can come.